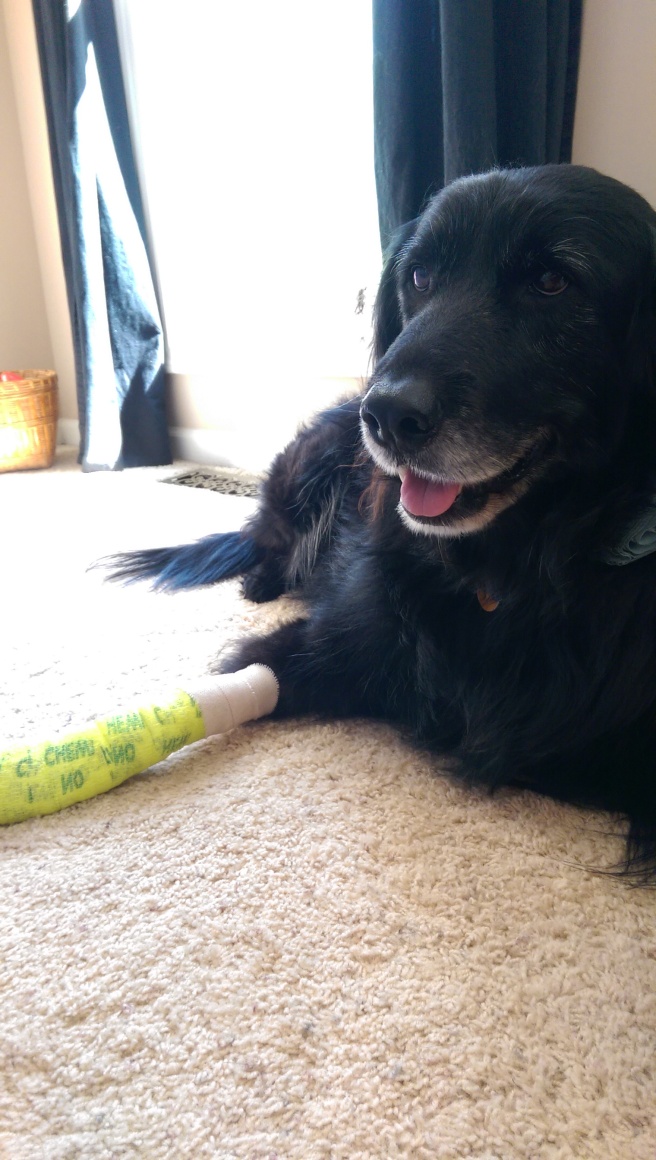 Last night Bernice brought Emmy upstairs to me and worriedly told me something was wrong with Emmy. I, uh, *cough* was busy playing The Sims. Anyways, I went over to Emmy and she was limping.

I checked her whole front paw and leg, in between the pads and everything. And I felt nothing. No blood, no obvious break, and nothing lodged in her paw. Bernice was tearing up, so I told her it was nothing to worry about, it was most likely a sprain.

Emmy was doing her, “Mommy, don’t leave me” face. So we snuggled for a while, but she didn’t stop doing her anxious panting or her “I need Mommy” face. I thought she needed an ice pack, “This will make it better!” I thought.

I told Emmy to stay there and even though she didn’t want me to leave her, she stayed, until she heard the ice maker. And then I heard her hobbling down the stairs. Poor baby made it to the landing and then stopped. But when she saw me, she began to come the rest of the way down.

I sat on the floor and opened my arms for snuggles. She happily came over. Then I tried to put the ice pack on her paw. It was like the world was coming to an end. She had a full on conniption. And she looked at me like I had violated her in some way, it was just an ice pack. Ugh.

After she calmed down from that drama, we were able to snuggle again. I kept an eye on her all evening and could tell she was in horrible pain. The worst I’d seen her since we had some early stage cancer removed. Thankfully, we had some left over pain pills and after we gave her those, she fell asleep.

I told David that we needed to take her to the vet in the morning, she was in too much pain. It had to be bad if she didn’t want any of her toys, including her antlers, and was letting Rosie chew on both antlers. Those are fighting words and she didn’t move a muscle.

By the middle of the night I was freaking out that it was something neurological. What if the cancer came back in her brain? Or what if there’s a mass on her spine I can’t feel?

David carried her up and down all of our stairs and she let him, something she’s never done before. And she let him put her in the Suburban and carry her into the vet. I knew she must be in horrible pain.

The vet checked out the paw and did an x ray, sure enough, Emmy broke her pinky toe on her front right paw. Poor baby. Thankfully, it was a clean break, but because it’s in a weird place on her paw it will take a long time to heal. 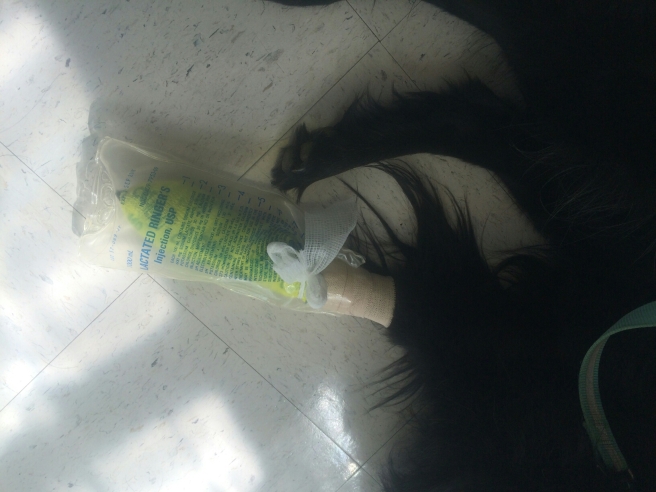 Because it’s a Saturday, they didn’t have time to splint the paw, so they wrapped her paw and leg up and we’ll be going back in a couple weeks to have it checked out and splinted (is splinted a word?). She also has lots of pain pills.

Of course, I’m relieved it’s nothing too serious, but I’m sad that she’ll have to spend the rest of the cooler months indoors or resting. Fall, winter, and spring are her favorite seasons. She’ll stay outside for hours, just enjoying the day, chasing squirrels. She’ll have to leave that to Rosie for the next few months.

I’m so proud of my little Emmy. She’s been such a strong girl. No whining and no complaining, even though she had every right to. I’ve been snuggling her as much as I can, I have to baby my little girl! I just hope this break heals well and only takes a couple of months. She’s been such a good girl through all of this, she’s my sweet Emmy Lou.