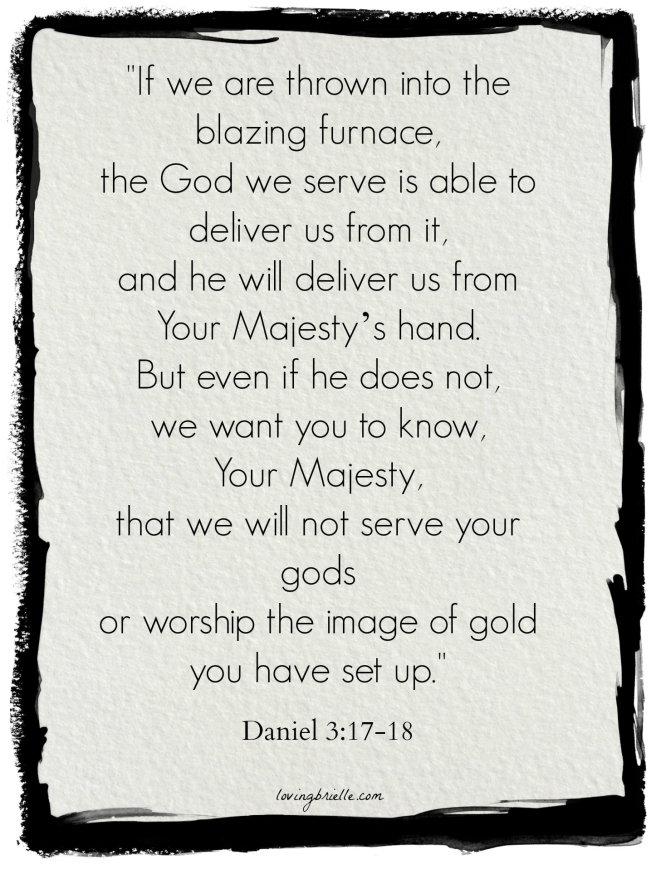 *Update on Brielle last night and our chat with the minister.*

Brielle was such a silly girl last night! We watched the pilot of the new show Supergirl and Brielle really liked it. She was kicking up a storm. We then watched the Bones and Sleepy Hollow crossover, Brielle liked Bones, but wasn’t too crazy about the Sleepy Hollow episode. She’s so funny, I have no idea what was so stimulating about Bones and Supergirl, but she had fun! Later that night David read her “Little Red Riding Minnie” and Brielle loved that story too! Which is good, David had been reading some duds that she was not enjoying.

Okay, long update about our talk with the minister on Wednesday. So some background information about David and I. We were raised on opposite ends of the spectrum in regards to church theology. I was raised Church of Christ which tends to not believe in supernatural things, such as miraculous healing. David was raised Pentecostal, which believes in supernatural things. David grew up hearing about healings and such, I was raised to believe those stories were made up. Skepticism was pounded into my head from infancy, whereas David has a more natural skepticism, perhaps even a healthy dose of skepticism. Combine college with my upbringing and I hardly believe anything, not something I enjoy about myself. I must add, this is not a criticism of mine or David’s upbringing, but rather a statement of our past.

David has been praying for healing this entire pregnancy, I have not been open to that idea until the beginning of October. It took quite a bit of strong nudging from God for me to finally listen, again, skepticism. So I’ve spent the past month reading everything on the subject, learning as much as I can. And what I found was wild extremes that resulted in an even deeper confusion and ignorance on my part. But I did realize that the Bible was pretty clear that healing is something that happens and something as Christians that we should be open to. So David scheduled a meeting with someone we could speak to about all of this and give us advice. What do we need to do? Are we doing enough? Is our mindset off? David and I were both lost as to what we needed to do and we needed help, advice.

The minister explained to us the far right and left of healing theology. From those on my end, to those who believe it and claim it. Meaning those who say God has healed my (fill in the blank) and because I have declared it, it will be done. He explained the problems with both. One gives no room for God to work in our lives, the other makes it so that we have to do all the work in our lives and we end up battling our faith and belief instead of trusting God’s will.

If he answers no, it’s not because he doesn’t care or want to, but rather because there is more to the situation than we understand. Similar to how a parent handles a request from a three to four year old. Their request may be perfectly acceptable, but saying yes may not be the best option. Personally, I don’t like that answer, but really, no one does.

If he answers with a process of healing, he also has a reason for that. But this was interesting to me and something I had wondered about. Does God ever kind of heal, can his healing be tampered with, and does his healing take time? Well that’s what this option was about. The minister believes that when we pray for healing, not miraculous healing, that God answers with a process of healing. Meaning things begin to change, and if something goes wrong because of outside forces, such as medical or personal intervention, that can cause a problem and get in the way of what God intends.

Then we talked about instant or miraculous healing. And this was interesting, because I just assumed God would heal instantly. He said that sometimes God answers a healing prayer with instant healing, but that a lot of times, you need to pray for miraculous healing to get that instant result. And even still, God may not answer how you want.

We talked about wanting proof and how that isn’t a bad thing to ask for and doesn’t lessen our faith. We talked about how an ideal faith is trusting God with the outcome, no matter the result.

“If we are thrown into the blazing furnace, the God we serve is able to deliver us from it, and he will deliver us from Your Majesty’s hand. But even if he does not, we want you to know, Your Majesty, that we will not serve your gods or worship the image of gold you have set up.” Daniel 3: 17-18

Then we talked about what has happened in our situation. We told him about how Brielle suddenly developed teeth, her weight and measurements were suddenly brought into the normal range, the physical things I had felt when we had prayed, and the improvement in her mental state. We explained how Dr. B seemed confused and bewildered at times and we shared other experiences that had occurred during this pregnancy. The minister looked stunned and said that since we hadn’t seen a confirmation of full healing, that he believed God is in the process of healing her and that the things we had seen may have very well been confirmations that she is improving.

It was incredibly encouraging to hear affirmation from someone who has experience with this. David and I feel a bit lost at sea through all of this, and it was good to have someone to talk to and encourage us. We definitely needed it. Our doctor’s appointments aren’t what I would call encouraging or hopeful. They feel more soul crushing and pessimistic.