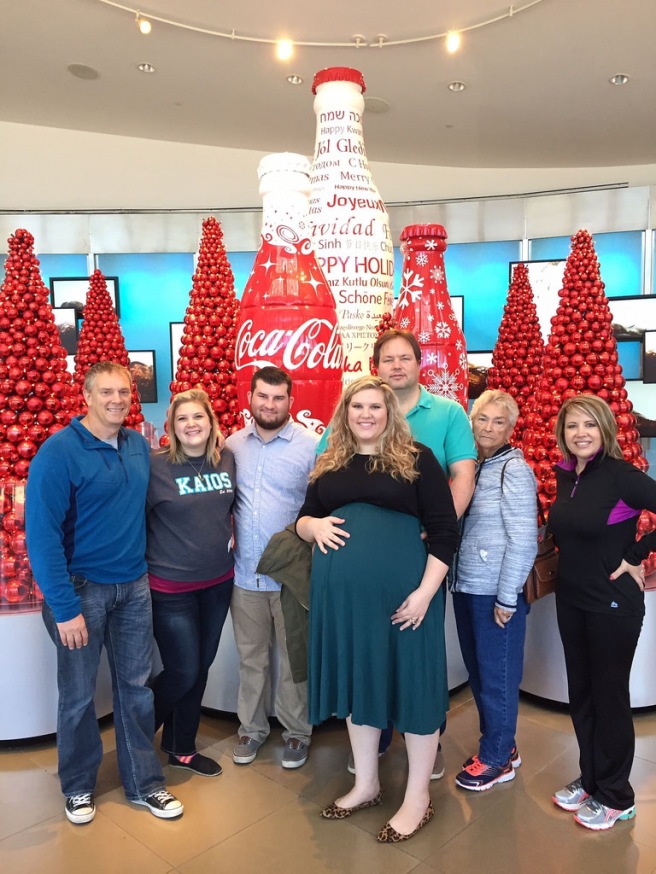 The week before Brielle was born was not planned. As many of you know, we had originally thought Brielle would be born on Monday, November 9. My family had come in that weekend and my Grandma came not long after that. It took a while to get in touch with Dr. B, and by the time we did, he had scheduled it for Thursday afternoon. At first we were all a little frustrated with this, but we all soon came to realize what a gift this was. We had the opportunity to spend a four days together as a family, with Brielle, doing fun things together.

We took her to church, watched movies, had tasty meals. It was a lot of fun and Brielle had a lot of fun. It took her a bit to get comfortable with everyone again and she preferred the moments when it was just her with David and I, but after she became accustomed to their voices she began to wiggle happily again.

My family decided Monday night that they were going to visit the World of Coke museum. I really had no desire to do this. It seems incredibly strange to me to go to a museum about food, especially food that is in no way healthy for you. Until Tuesday morning, David and I had decided not to go, and then I thought, “No, this could be a fun outing with everyone and Brielle might like it.” Turns out, it was fun, and Brielle had fun too!

Zach (my brother-in-law) shares a birthday with Brielle, so we made sure to do things special for him while he was here, it was his 21st birthday. We went to this place called Max’s for lunch and it had a Yoda drawing inside, so we posed with it, and Brielle and I took one with Uncle Zach too!

We then did our tour, Mom and Dad made sure to get me a wheelchair and I think Dad had a little more fun with that than he should have. It can be a very scary thing when Dad gets behind a wheelchair, but we survived wink emoticon In all seriousness, David and Dad took turns wheeling me because I was kind of heavy.

The tour was fun. Brielle, David, and I took pictures with the Coke polar bear. And that was a lot of fun, the guys doing the photography asked how many babies I was carrying. I was asked that question quite a few times. I think Brielle had fun with the bear, we sure did.

We also did this 4D theater thing. That was seriously traumatic for everyone else. I was advised to sit in the nonmoving seats, so I did. I was so thankful. I think Brielle would have died if I had been sitting in those chairs. Dad sat in the row in front of me because he wanted the whole experience, a few minutes in he had moved to sit next to me. Those things were rough, but Brielle had fun with the other parts. There would be puffs of air that would come out and she would jump and wiggle each time they shot out.

We tried all of the Coke flavors. That was disgusting. Brielle and I did not like it. She didn’t even like the pineapple drink. Or the African drink that tasted like cough syrup, big surprise there.

We went through the gift shop and I bought Brielle a World of Coke onesie. Dad picked her out a Christmas ornament too. It made me so happy to get things for Brielle. I told Dad that as well. I loved planning a future with her, it was a great thing to hope.

We finished off the day with Finding Nemo, Brielle did so many big kicks. My stomach was jumping around during most of the movie. She loved the movie and I think that’s hilarious. She loves movies that are in water. The Little Mermaid, Atlantis, Finding Nemo, etc. I mean she was a mermaid for Halloween and she did have an ocean to swim in, there was enough water in my tummy for her to be an olympic swimmer.

Brielle had a good day. I’m glad we had these extra few days to give her more good days. I wish she could have more.